Environmental impact of HFO refrigerants & alternatives for the future

Despite the EU F-Gas Regulation (No. 517/2014) (or precisely because of it), refrigeration (1) system operators and manufacturers are still faced with the question of which refrigerants should be used today and in the future. Synthetic HFO refrigerants, so-called “low-GWP” refrigerants, are offered by the chemical industry as HFC substitutes. Based on recent studies by American, Australian, British, German and Swiss scientists, the authors analyse the current situation of the refrigerant market and assess the refrigerants that will still be economically viable and permissible in the future, while at the same time being environmentally benign.

Due to their ozone depletion potential (ODP), fully halogenated chlorofluorocarbons (CFCs) and partially halogenated CFCs (hydrochlorofluorocarbons, abbreviation HCFCs) have not been permitted in new installations in the EU for more than twenty years thanks to the Montreal Protocol and corresponding national regulations. They release reactive chlorine in the upper atmosphere, causing degradation of and holes in the ozone layer. The HFCs (hydrofluorocarbons) which contain no chlorine, offered by the chemical industry as substitutes, are now regulated internationally because of their high global warming potential (GWP) (2) by the Kigali Amendment to the Montreal Protocol and within the EU by the F-Gas Regulation.

Both the Kigali Amendment and EU F-Gas regulation prescribe a phase-down of HFCs, which in the EU is well underway. Currently, only 45% of the CO2-equivalent quantity from 2015 may be placed on the market in the EU. Unfortunately, there are extensive illegal HFC imports into the EU. According to the EFCTC (European Fluorocarbons Technical Committee), there were up to 73 Mt CO2-equivalent HFC black imports in 2018 and 2019.

HFOs (Hydrofluoroolefins) are currently being promoted as low-GWP refrigerants by the chemical industry and various refrigeration and air conditioning system manufacturers. HFOs are composed of the same atoms like HFCs: carbon (C), hydrogen (H) and fluorine (F), but are unsaturated organic compounds – hence the suffix “olefin”.

Currently marketed HFOs are based on alkenes like propene (e.g. HFO-1234yf or HFO-1234ze) and sometimes butene (e.g. HFO[1]1336mzz) or ethene (HFO-1132a). Like their hydrocarbon parent, they have a double bond between two carbon atoms. This double bond makes the molecules less stable and leads to fast decomposition in the atmosphere – within a few days instead of years to decades for HFCs. 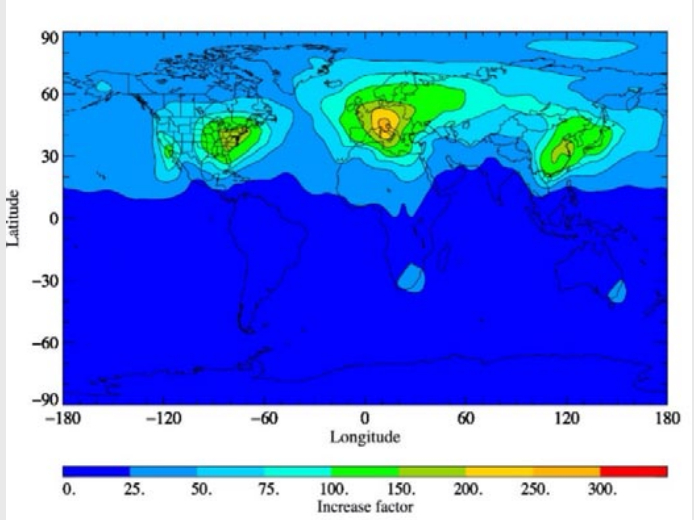 Predicted TFA increase in the troposphere (the lowest 8 km of the atmosphere) with annual HFC-134a emissions of 210,000 tonnes per year and future HFO-1234yf emissions at the same level if HFC134a is completely replaced by HFO-1234yf (Holland et al., 2021). Even higher HFO-1234yf emissions are predicted for the future by Holland et al. (2021). Reprinted with permission from ACS Earth & Space Chemistry. Copyright 2021 American Chemical Society.

Due to its high polarity and low degradability, it is difficult to remove TFA from drinking water (ICPR 2019). HFCs also produce trifluoroacetic acid when degraded in the atmosphere, but at a much slower rate and thus less locally and to a much lesser extent (Luecken et al., 2010). HFO-1234yf causes about five times more TFA than HFC-134a (Luecken et al., 2010), i.e. HFO-1234yf transforms 100% into TFA (Behringer et al., 2021). Unfortunately, natural degradation processes cannot compensate for the increase in TFA caused by HFO emissions (Holland et al., 2021).

Therefore, according to simulations by Holland et al. (2021), the complete replacement of HFC-134a by HFO[1]1234yf leads to 33 times as much TFA worldwide in the lower approx. 8 km of the atmosphere (troposphere). However, due to the rapid decay of HFO-1234yf in the atmosphere, the increase in TFA varies greatly from region to region and is significantly higher, especially in areas with many vehicle air conditioning systems, see Figure 1. In Central Europe, up to 250-fold increases are predicted (Holland et al., 2021). This is – to our knowledge – the first study predicting such high increases in regional TFA depositions. If the findings can be verified, it would most likely mean the end of widespread use of HFOs.

Rainwater deposition measurements of TFA at eight different sampling sites of the German Meteorological Service (DWD) systematically distributed over Germany (Behringer et al., 2021) reveal a 4-fold higher TFA deposition during the actual measurement period from 2018 to 2020 compared to 1995/1996. Behringer et al. (2021) conclude that “the trifluoroacetate concentrations in rainwater determined in the measurement program are significantly higher than previously reported in the relevant literature” thereby supporting the findings of Holland et al. (2021) that there will be a much higher increase in TFA deposition in central Europe as previously anticipated. TFA is degraded in the atmosphere within approximately four months (Holland, et al, 2021). However, by far the largest part of the TFA formed in the air from HFO is already washed out of the atmosphere beforehand by rain, fog or snow, which reduces the residence time of TFA in the atmosphere to five to nine days (Holland et al., 2021).

A not inconsiderable part of the washed-out TFA accumulates in terminal water bodies and eventually ends up in groundwater at some point. TFA is very stable in water and not particularly healthy for some aquatic organisms. It cannot be removed from water with the purification processes used in today’s drinking water treatment (ICPR 2019). Due to the longevity of TFA in the environment (up to 30 years), Behringer et al. (2021) propose that any HFO regulation will come into force too late once the negative consequences of an increased amount of TFA in rainwater becomes evident.

Besides the HFO-TFA issue, which has been discussed for some years and which – especially in the case of HFO-1234yf – seems to become more severe than previously proposed, another issue regarding HFOs is just popping up: HFO-1234ze might form HFC-23 as one of its secondary atmospheric breakdown products (Campbell et al., 2021). HFC-23 is a very potent greenhouse gas with a GWP100 of 14,800. Campbell et al. (2021) suggest that the secondary GWP of HFO[1]1234ze would then be in the range of 1,400±700 considering the amount of HFC-23 which may form from HFO-1234ze in the atmosphere. An interesting new aspect and definitely not in favour of HFOs.

Using CFCs for more than sixty years as refrigerants, aerosols, foam blowing agents, etc., the ozone layer in the stratosphere has been damaged; with HFCs in the last 30 years or so, the atmosphere below the ozone layer has been heated, and now with the next generation of synthetic refrigerants – HFOs, the lowest layer of the atmosphere and the waters at the Earth’s surface are potentially being damaged. Bravo! We have slowly moved from an altitude of about 20 km (ozone layer) to the surface of the earth. The misguided path of refrigerants that are foreign to the environment should, therefore, be ended as soon as possible.

An analysis conducted by Mark McLinden (2017) and his colleagues at NIST and the Catholic University of America using the PubChem database — a listing of more than 60 million chemical compounds — found that there are no fundamentally new classes of chemicals for use in vapour compression refrigeration systems (McLinden and Huber, 2020). McLinden and Huber (2020) conclude that HFOs are the last generation of refrigerants. More substances that would be suitable as refrigerants are not available from chemistry. If HFOs have to be phased out for one reason or another, we will have to fall back on first[1]generation refrigerants.

A hundred years ago – due to insufficient development of chemical engineering – only substances that also occur in nature were used as refrigerants, such as ammonia, CO2 and hydrocarbons. These refrigerants are, therefore, often referred to as natural refrigerants, although they are usually also produced synthetically. However, since the same molecules also occur in nature, they could be called nature-identical refrigerants, but the term “natural refrigerant” is most often used. For all these substances, the global warming potential (GWP) is well below ten – CO2 is as GWP-reference gas per definition equal to one and ammonia even zero.

Unfortunately, there is no single natural alternative that can replace HFCs in all applications, just as there is no single HFC refrigerant (or HFO for that matter) that can be used in all applications. Which refrigerant is most suitable depends on several factors, such as the local economic and regulatory situation, as well as climatic and other factors. Natural refrigerants offer a lower environmental impact from direct emissions. In addition, many natural refrigerant technologies offer additional indirect emission reductions through increased energy efficiency compared to conventional HFC technologies (Kauffeld, 2016). Refrigeration systems using ammonia or hydrocarbons achieve 10- 15% higher energy efficiency.

This compensates for any energetic disadvantages due to intermediate secondary refrigerant cycles, which may be necessary due to local safety considerations. When designed and operated properly, such indirect refrigeration systems can be energy efficient and offer the advantage of thermal energy storage.

In summary, we should not only look for refrigerants with low global warming potential (GWP), but also choose the ones that are not leading to dangerous degradation products like hydrogen fluoride (HF) or trifluoroacetic acid/ trifluoroacetate (TFA). Several studies have shown a significantly higher concentration of TFA in rainwater, thus eventually also in groundwater and drinking water. 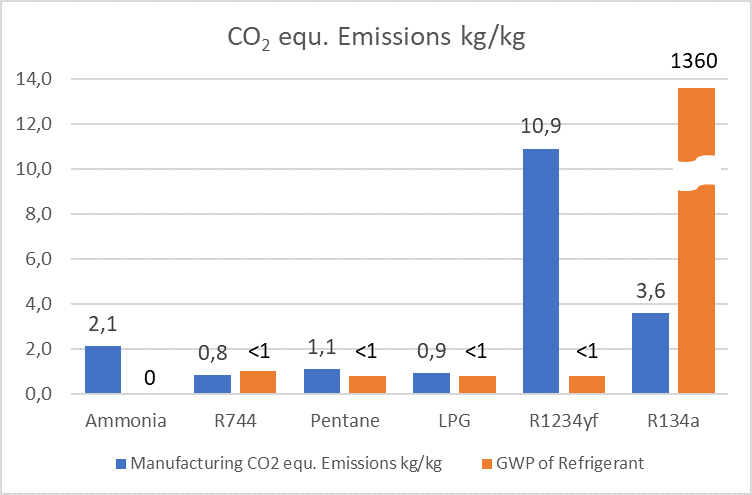 Refrigerant production-related CO2-equivalent emissions (Baral et al, 2013; Wood and Cowie 2004; Winnipeg Sewage Treatment Program South End Plant, 2011), GWP100 of the refrigerant (UNEP RTOC 2018). Since the manufacturing CO2-equ. emission figures are from three different publications, the numbers may vary to some extent. The overall picture, that HFCs result in higher and HFOs in even higher CO2-equ. emissions compared to natural refrigerants is without doubt since the chemistry behind the HFC and HFO molecules is more complex

Alternative refrigerants should be halogen-free, avoiding thus atmospheric TFA and HF formation – and maybe even the very potent greenhouse gas HFC-23 (CHF3) as a secondary atmospheric breakdown product. Just as the use of CFCs and HFCs turned out to be a mistake because of their ozone depletion and global warming potential, the authors believe that HFOs will disappear because of the environmental impact of their atmospheric breakdown products – especially the TFA issue. The future of vapour compression refrigeration technology thus belongs once again unreservedly to the natural refrigerants that have already been used successfully for more than a hundred years: ammonia, carbon dioxide, hydrocarbons and water.

The environmentally harmful effect of HFO refrigerants due to the trifluoroacetic acid that is formed as one of their atmospheric decay products will very likely lead to banning HFO refrigerants in a future European F-gas regulation. Ultimately, only natural refrigerants will be approved for new installations. In order to reduce the risk of flammability and toxicity of some natural refrigerants to a minimum, there will be installed – especially for applications with access by the general public – an increasing number of indirect refrigeration systems.